Honey fungus (Armillaria sp.) is the name given to the numerous species in the genus Armillaria which can be found in the UK. It is prevalent throughout the country and affects a wide range of plant and tree species, including many of our favourite garden trees such as Cherry, Apple and Pear. However, despite its sweet name, this fungus is a tree-killer, which will not only make short work of the tree but will soon spread to other nearby plant species.

Trees suffering from an infection of honey fungus might display symptoms such as a thinning or sparse canopy, or a yellowing of the leaves. However, the honey fungus is most recognisable when the mushrooms appear annually in the autumn, typically in large clusters on the roots or base of an infected tree. The caps of the mushrooms can be yellowish, brown or olivaceous in colour and the stipes bear a ring. When the fungus isn’t fruiting, it can be identified by its dark-coloured rhizomorphs which are colloquially called “bootstraps”, owing to their lace-like appearance. These can be seen all year round. While its most tell-tale symptom is white “sheet-like” fungal growth between the bark and wood, at around ground level, which has a strong mushroom smell, although it is usually not visible as it resides under the bark.

Honey fungus is generally an opportunistic parasite, meaning that it prefers to infect plants which are already weakened by other stresses such as drought, other diseases or pests. It can cause the decline and death of trees by severing the crucial vascular cambium (essential tissue that supports growth) around the roots and the base of the stem. And after killing its host, the honey fungus will persist in the environment, feeding on the dead material and posing a risk of infection to other living plants in the area.

In this case, prevention is definitely better than cure. Good tree management to improve tree resilience against pests and diseases includes ensuring that:

But if your tree already has it, then it’s normally pretty bad news… It is fast-acting, and in the UK, there are no (legal) chemical controls. Management methods exist, such as the use of root collar excavation using compressed air. This technique allows the soil around the roots to be de-compacted and reduces moisture levels around the base of the stem which in turn can cause the mycelium of the fungus to recede and help the tree to recover. Studies have shown this to be an effective treatment for trees in the early stages of infection by honey fungus. Other potential treatments can involve the removal of the infected parts of the tree’s root network, but this is an invasive technique and carries risks both in terms of the survival of the tree and in terms of the reinfection of the tree.

Where a larger tree is affected by honey fungus and there are concerns about its overall structural integrity, then the tree will require some monitoring. Sonic tomography can be used to visualise the extent of the internal decay to determine if the tree can be safely retained, although this is often part of a long-term process of managed decline.

Lastly, where honey fungus causes the death of trees it is recommended that as much of the infected material be physically removed as quickly and comprehensively as possible This will reduce sources of inoculum in the soil and reduce the risk of infection to neighbouring plants, or future planting on the site. However, it is soil-borne, so where you are looking to re-plant, assume that it is lingering in the soil and think about tree species which are more tolerant to this vicious and virulent pest.

JCA are experienced with different types of fungi and we can offer our expert advice.  If you have any concerns over the Health and Safety of any of your trees, please call us on 01422 376 335 or email info@jcaac.com 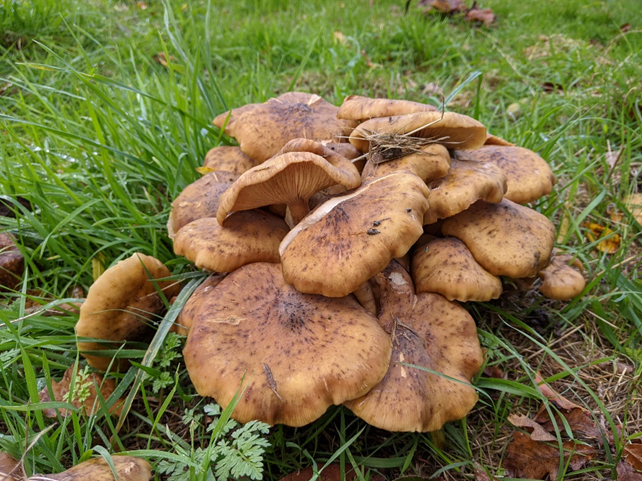