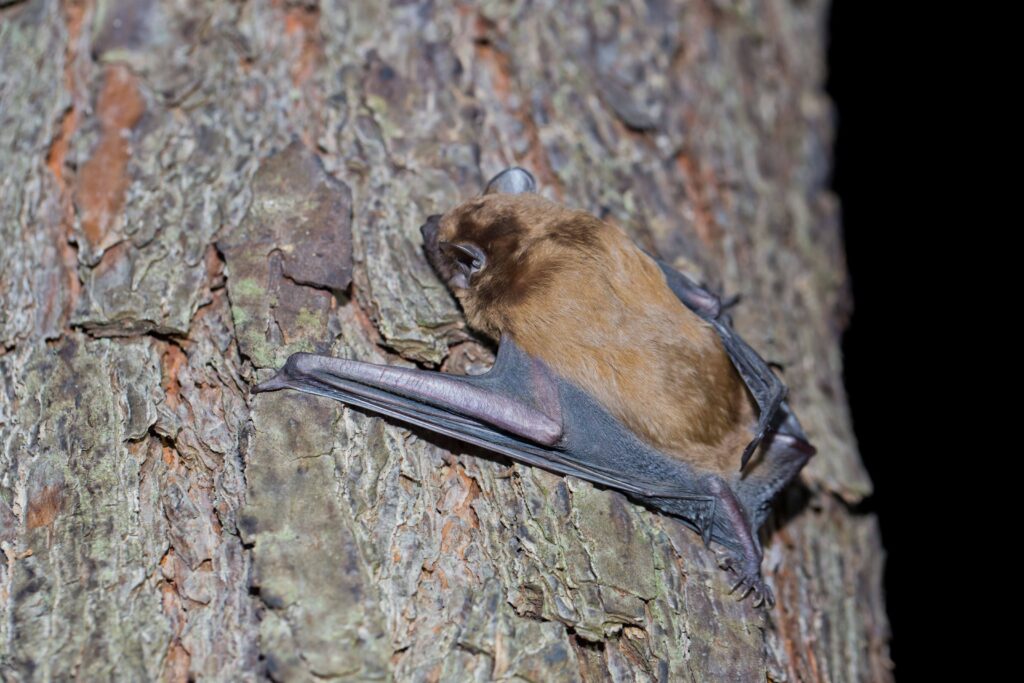 Despite the 17 species of bat in the UK, sighting these wonderfully alluring mammals is a rarity many people miss out on in their lifetimes. This is due to their nocturnal nature and their inactivity during the winter months while they hibernate. To spot them we must be outside between March and November, preferably at dawn or dusk roughly 15-30 minutes before or after each respectively.

The Pipistrelle and bat tendencies

The most popular type of bat to be spotted tend to be Pipistrelles with roughly 75% of sightings being of this type; Common pipistrelle, Soprano pipistrelle and Nathusius pipistrelle.

All UK bats eat insects. Each species has its own favourite insect species, has adapted specialised foraging methods to catch its prey. Most bats catch their prey in mid-air.

Pipistrelle bats can eat over 3000 insects in a night during the summer months.

During the summer period (May-September) bats are rearing young and are at their most active. It is at this time of the year when you will see, when the light is fading, bats bobbing in and out of gardens in a seemingly erratic display of aerial acrobatics.

In the winter months many bat species go into a dormancy phase, and can be found in old mines, tunnels, bridges, buildings and caves. Hibernating bats can only be surveyed by a licensed bat worker

Do you need an ecological appraisal for a new project?

If you are going to potentially disturb bats then you will require an ecological bat survey, carried out by a licensed bat worker prior to applying for planning permission.

At JCA Ltd we have a team of licensed ecologists able to carry out initial ecological bat scoping assessments, hibernation, emergence/re-entry and activity surveys.  These surveys should be carried out where developments are likely to take place, for example re-roofing of buildings, extensions, demolition or extensive conversions and new housing or commercial development. Bat surveys should also be carried out when trees are to be removed or heavily pruned.

If you would like to find out more about the surveys we offer at JCA Ltd and how we may be able to help you then please get in touch and we can discuss your survey requirements. We can guide you through the procedure and provide you with support and advice every step of the way.  You can also read more about the different types of Bat Surveys we offer here  Tel: 01422 376335 or email info@jcaac.com

Request a call back

Not sure where you stand on an arboricultural or ecological related issues? At JCA our specialist team are here to help you, contact us today!

Industry leading arboriculture consultants, reporting on all arboricultural and ecological related issues throughout the UK.

This website uses cookies to improve your experience while you navigate through the website. Out of these, the cookies that are categorized as necessary are stored on your browser as they are essential for the working of basic functionalities of the website. We also use third-party cookies that help us analyze and understand how you use this website. These cookies will be stored in your browser only with your consent. You also have the option to opt-out of these cookies. But opting out of some of these cookies may affect your browsing experience.
Necessary Always Enabled
Necessary cookies are absolutely essential for the website to function properly. This category only includes cookies that ensures basic functionalities and security features of the website. These cookies do not store any personal information.
Non-necessary
Any cookies that may not be particularly necessary for the website to function and is used specifically to collect user personal data via analytics, ads, other embedded contents are termed as non-necessary cookies. It is mandatory to procure user consent prior to running these cookies on your website.
SAVE & ACCEPT